Swedish trio Hypothermia, known for its Ethereal black metal/rock output, have premiered a brand new song, "Svartkonst". The track features on the band's upcoming new album under the same title, set to be released on May 15th in Europe and May 19th in North America via Agonia Records. The ACT, whose ranks include musicians of Lifelover and Kall fame, have made the song available at this location:

"Svartkonst" HAS been recorded with the intention of giving more depth to the music itself, and allowing the listener to engage with the album's escalating atmosphere on a more personal level.

The offering HAS been divided over five compositions and features a guest appearance of the violinist, E.B. 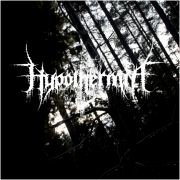 Hypothermia was founded in 2001 as a Means to channel Negativity and Manifest it in audial form. "Following Ancient traditions carried in spirit and Blood, through wanderings and introspective journeys a communion with a deity of The Void is formed" - comments the band.

The mysticism of Hypothermia is characterized by its highly ritualistic compositions, which are conducted in shamanistic trances of minimalism, and binding their followers in its meditative spell. Always recorded live, sharing with the world something honest and unique.

After being active for Thirteen years the constellation of Hypothermia that HAS evolved through the years from a duo to a trio, will be stepping further out of Obscurity by slowly evolving to an orchestra.