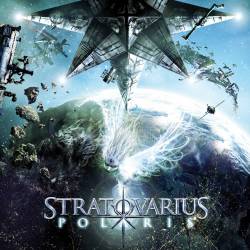 18 Februar 2010
It is always inherently unfair to compare and contrast line up changes when reviewing a band’s latest album; however, in the case of Stratovarius’s 2009 LP release “Polaris” is it quite clear that the absence of former lead guitarist/songwriter/band co-leader Timo Tolkki has made a profound impact on the band’s overall balance with their sound. With respect to new guitarist Matias Kupiainen, his role in the band as compared to Tolkki’s is greatly diminished with veteran members Jens Johansson (keys) and Timo Kotipelto (the voice) filling in the gaps. “Polaris” is that result: a very spacey, fantastic, FM style-like brand of metal to the lightest degree.

To be fair, the talents of the three remaining veteran members play off the album as a virtual showcase. “Blind”, one of the record’s best songs by virtue of its comparative heaviness, highlights every member at least once, including a synth harpsichord bookend and two slow to blast-off-heavy moments. It also sports one of the more melodic choruses on the album. “Forever Is Today” is the other power metal track that totally gets its strength from an anthem-like chorus and heavy rhythm guitar riffing. Amazingly, it is also the only song that is introduced with lead guitar!

The vast majority of the album; however, never gets out of second gear rather preferring to stay on a medium track in terms of tempo and heaviness. “King Of Nothing” and “Winter Skies” is keyboard dominant with a pace that feels sluggish (of course, Jens Johansson is one of THE very best metal keyboardists out there today, and if it is his work that Stratovarius is to be judged, his most impressive offerings would be found here). As for the vocal lines – this is the apparent backbone of all songwriting with very few extended instrumental movements (hardly any solos worth noting as well) and a song structure that calls for singing virtually from beginning to end. To a fault, Timo Kotipelto is very mechanical – the very opposite of soul. So, when looked at from these two points of view, the areas of bass, rhythm, and lead, are very conspicuously shrunken.

“Polaris” sounds less like the work of a complete band and more like a solo project for Kotipelto and Johansson. Overall, the talents of the band as a whole hasn’t been completely revealed, so for Stratovarius, the effort put forth that is “Polaris” comes off in the end as unimpressive and weak.
1 Kommentar
1 Like

Mitteilen
deathey - 19 Februar 2010: Vinrock666,it's sad but i must agree with you this time... this album absolytely shattered my high hopes... it's a shame that band,who created "Hunting High and Low","Mother Gaia","Land Of Ice And Snow" and much more great song,no plays some easy,typical shit,differentless from each other... it's bad but again,i must say,i'm hopin' it lasts 'till the new album and then they'll burn our ears again...

On the Spur of the Moment